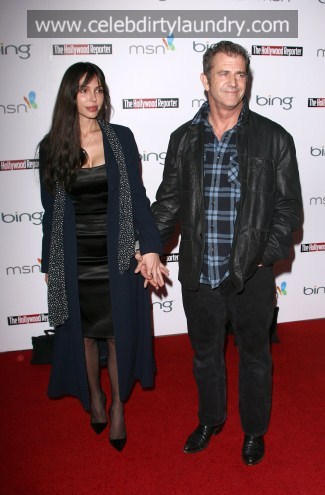 A new tape recording reveals a teary Oksana asking 54-year-old actor Mel Gibson what he thinks he is doing hitting her while she is holding their two-month-old child in early January.   According to RadarOnline.com, Oksana can be heard on the tape saying: “What kind of man is that who would hit a woman while she is holding a child in her hands, hitting her twice in the face? What kind of man is that?”

The ‘Braveheart’ star answers: “You know what – you f***ing deserved it.”   The allegations are the latest in a string of accusations by Oksana, who has also filed a restraining order against Mel.
Other recordings allegedly feature the two-time Oscar winner telling the Russian singer she looks like a “f***ing pig in heat”.   Mel has also sought a court order to stop the recordings being publically released, and to prevent photographs which apparently show the extent of the injuries he caused Oksana – he is alleged to have given her two black eyes and broken her front teeth.