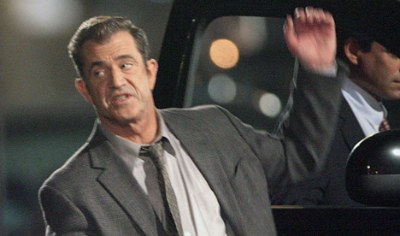 Mel Gibson was gearing up for his role as a Thai tattoo artist in the upcoming movie, The Hangover 2. He was since fired from the role in the flick, after producers heard complaints from the cast members. We’ve heard that it was mainly Zach Galifianakis who caused the ruckus, thus leading to Mel’s firing from the movie.

He has since been replaced by fellow actor, Liam Neeson in the bit part. This has gotten Mel pretty hot under the collar, says a source close to the actor. He was looking at the part like what the cameo in the first movie did for Mike Tyson. He wanted to make a comeback, but the original cast members protested and the producers were forced to choose someone else.

A source said, “He doesn’t understand why Mike Tyson, a drug user who turned his life around, was given a chance while Mel was kicked to the curb. Everybody deserves a second chance.”

Yeah, but did Iron Mike knock his girlfriend’s teeth down her throat and cuss her out repeatedly? He’ll have to get on some positive PR if he wants that second chance. Don’t you think?