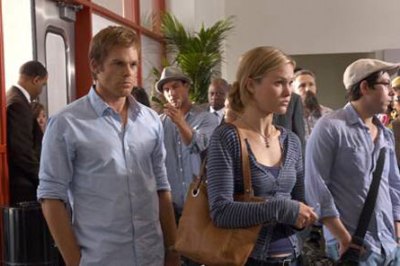 Now that Michael C. Hall has filed for divorce from his wife, Jennifer Carpenter, there are rumors fluttering about on the internet suggesting that he had a hookup with Julia Stiles.

According to Lainey Gossip, there was a recent blind item about someone in Hollywood divorcing their wife. That lead us to wonder who it could be, since there have been a lot of breakups and divorces in Tinseltown lately.

Check out what Lainey had to say:

I mentioned yesterday that there are a few more details about one of the recent splits announced in Hollywood this week. Turns out there was someone else: his love interest this season on his tv show. Their chemistry was so crazy and so evident to everyone that writer and producers, seeing it play out on set, actually cranked up their sex scenes to capture it for show. Her career has seen a resurgence since.

Eventually the two fell in love. They were together, very close, at a Halloween party in New York this fall hosted by a famously controversial writer (this isn’t a super important detail) and those who observed them that night are not surprised now that he’s ended it with his wife.

Now it’s being speculated that the cheater is Michael C. Hall and his love interest is Julia Stiles. We haven’t heard anything contrary to this, but we’ll keep you posted.