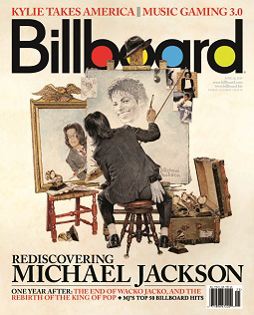 This week’s Billboard cover story is none other than the King of Pop, Michael Jackson. Billboard.com also has a great in-depth list (including videos) of MJ’s top 50 hits, based on the Billboard charts.

In a career that spanned almost all 50 years of his life, Michael Jackson became a mainstay on the Billboard charts.   It was his dominance on the weekly Billboard Hot 100, however, that entered him into the record books: As a solo artist, 13 of his singles went to No. 1 — the most by a male artist — and an additional four songs by the Jackson 5 also topped the chart.

Here, Jackson’s top 50 singles are ranked based on a track’s performance on the Hot 100. (Nielsen SoundScan started tabulating sales data for Billboard in 1991; as many Jackson songs were released before then, a measurement based on strict sales numbers would be incomplete.) Songs are ranked based on an inverse point system, with weeks at No. 1 earning the greatest value and weeks at No. 100 earning the least.