Michael Lohan Lies He Blabs To The Media About Again About Lindsay! 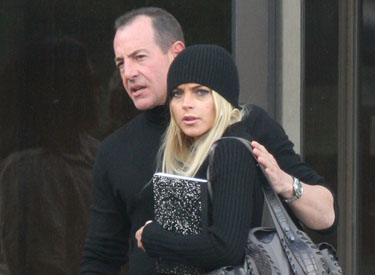 Wait a second didn’t Michael Lohan say he was going to stop talking to the press about Lindsay Lohan.  Now how long did that take?  Well only as long as he got to see her again.  Michael saw Lindsay Lohan Tuesday November 10th, 2010 and the condition to see her was he shut his blabber mouth to the press.  Now Michael is very tricky and he did not actually speak about the his meeting with her but rather talked about his hopes of seeing her and what she has to do next.  OK’s blogger interviewed Michael:

You just got to see Lindsay after wanting to see her for a long time. What’s going through your mind right now?
’m looking forward to seeing her again.

So do you plan on seeing her again?
(Nods like he plans on it, but won’t verbally confirm)

Why is it so hard to maintain a relationship with Lindsay?
The only problem is when you are in the public eye like we are, the entire relationship is under scrutiny so it’s hard. It’s harder for her.

To read the rest of the interview visit Ok Magazine!