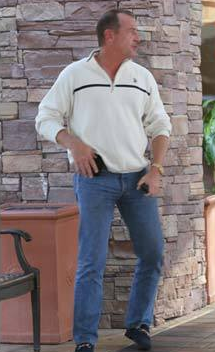 In another pathetic attempt to get to Lindsay Lohan, Michael Lohan has publicly announced that he is never talking to the media again, and especially not about his family.  How touching.

Papa Lohan declares, “I want to make a public statement that I will not be commenting on ANYTHING relating to my daughter Lindsay, or ANYTHING my ex-wife Dina, or any ‘sources’ related to her, might say.”  NO MATTER what accusations, lies or conjecture are disseminated to the public about me, for the sake of the ones I love and with hope of creating peace, I WILL NOT respond, in ANY way, to what is said or done, to me.”  Michael concludes, “For the sake of those I offended, I apologize and ask their forgiveness … So please refrain from calling or contacting me.”

Sadly, once a liar and a thief, always a liar and a thief, and that goes for Michael too.  The odds are posted and the bets being taken – how long will it be before Michael blurts out his next idiocy to the waiting mikes and cameras?  Some say days, some say maybe a week or two, others say hours!  We say – who cares – there is plenty of real news out there.

Bristol Palin Dances in a Gorilla Suit      TOO FAB

Halloween Costumes to Avoid at All Costs [CONTEST!]    COLLEGE CANDY