Mike ‘The Situation’ Has a Teeny Weeny Peeny 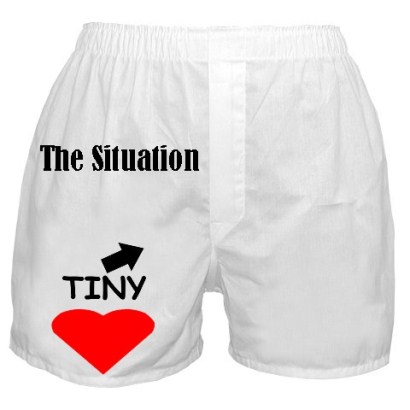 It seems that being a female conquest of Mike “The Situation” might not be all that, if you get my drift.   Florida club promoter Melody Eckerson had the gall to kiss and tell so to speak, comparing The Situation’s penis size to her pinkie finger, pretty pathetic for a guy who parades about the set on Jersey Shore half-naked most of the time.    These guys on the show spend lots of their time pretending not to pose but in fact hitting poorly executed bodybuilding shots almost all of the time – showing off their steroid induced six-packs and half-decent musculature, nothing special at all by bodybuilding standards, not even special by good amateur standards.  But one thing for sure, when you use juice, especially without scientific post cycle therapy which returns the penis and testicles back to normal, you wind up shrunken and flaccid, usually unable to get or maintain erections without the help of Viagra or Cialais.    In fact bodybuilders are the best custys for Viagra.

Poor Situation, here he is on International TV with two hot shows, Jersey Shore and Dancing With The Stars and now the whole world knows that he has a weak little willy.  Do they have a procedure that can address this problem?   Besides, don’t guys with this Situation always claim that its how you use it – that size doesn’t matter.  Its quality not quantity?