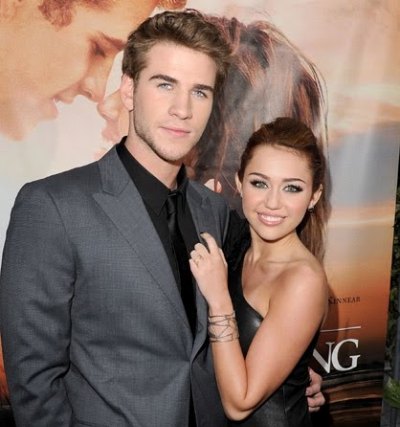 In an obvious attempt to get over her breakup with Australian hottie Liam Hemsworth, Miley Cyrus was seen laughing about the whole thing on set.

I guess she doesn’t seem too stressed out over their breakup, even though she should be. He’s obviously the one that broke things off. Why else hasn’t she spouted off about how she tossed him by the wayside in interviews? She’s a kid and that’s just what kids do. They have terminal diarrhea of the mouth about stuff like this.

But, I digress. People magazine reports:

Miley Cyrus isn’t sad about her recent breakup from Liam Hemsworth. Quite the opposite: she’s laughing it off – really.

Cyrus, 17, is busy at work on a new movie, LOL: Laughing out Loud, filming in Detroit. The comedy, about a teenage girl, her friends and dating in the age of Facebook, also stars Demi Moore, who plays Cyrus’s mother.

That’s one good way to let the other person know you’re not thinking about them. Or, she could just date other people already. You know he’s already doing it. There’s another sign that he did the dumping. Maybe she was just too much of a control freak brat for him.

Why do you think they broke up?  For Hot Miley News that is just breaking visit Earsucker HERE