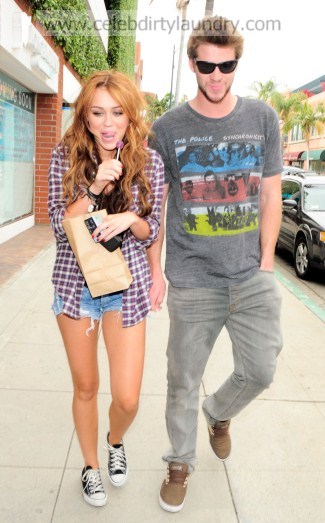 "The Last Song" actors and real life couple Miley Cyrus and Liam Hemsworth get giggly as they leave a medical building together while eating suckers in Beverly Hills, CA on April 15, 2010.  Miley who met the Australian hunk on the set of their new movie ‘The Last Song’ – is often asked by the actor to belt out her hit singles while he trains in the gym.   Discussing whether he listens to her music while he exercises, Liam said: "She’ll sneak in there every now and then. ‘The Climb’ is good or ‘Party in the USA.’ Even better, I will just get her to sing to me while I work out!" 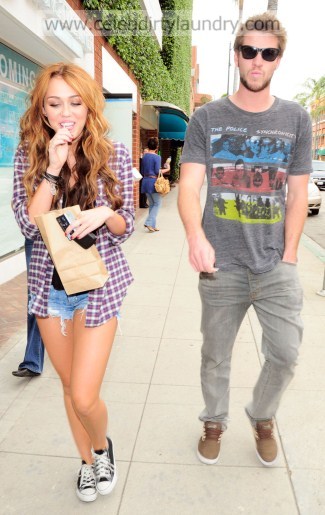 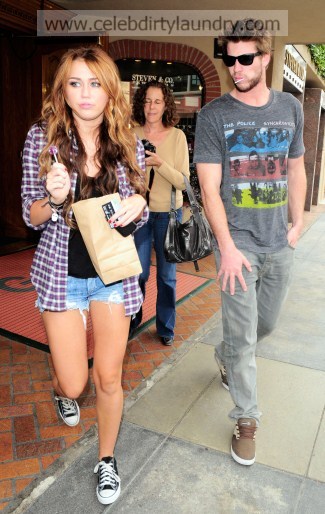 While the 20-year-old star uses surfing, weight-training and boxing to keep fit, singer-and-actress Miley prefers dancing. He explained to People.com: “She does a lot of dancing – so that’s her workout. I couldn’t keep up with her dancing because she’s super flexible and she’s throwing up her legs up around her head and stuff like that."   Earlier this week it was revealed Miley had splashed out and bought her first house.

While she is busy decorating the lavish building, Liam plans to add his own personal touch by hanging up signed photographs of himself all around her home.   He added: "I could come in and gather some pictures of myself to put on her wall and see what she says,” he says with a laugh. ‘I’ll sign it for her as well, and it will say, ‘Dear Miley, best wishes with the new house!’ "   Photos: Fame Pictures