Miley Cyrus – The Cause of Parents Divorce? 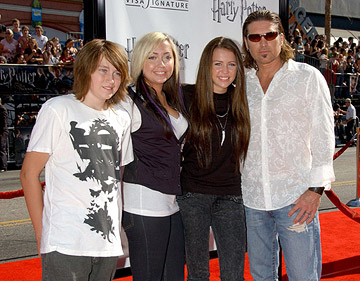 It is being reported that  Cyrus family are having a huge dispute about Miley and her recent bahavior and it  seems very believable.  Apparently Billy Ray Cryus is not happy with how Miley Cyrus is behaving or how she is treating him.   Well this is what happens when you create a superstar child.  Everybody loves her, she has tons of money and power, and yet she is an under aged adolescent still legally beholden to her parents whims.  Very frustrating – yet a part of growing up for everyone with parents, superstars not excepted.

According to The National Enquirer

Out of his mind with rage, BILLY RAY CYRUS furiously tried to kick down the door of his estranged wife TISH’s bedroom as she sobbed uncontrollably and one of their children cowered, terrified, nearby.  That was the explosive scene during a brutal fight at the couple’s Los Angeles home that led to the Cyrus’ ugly $100 million divorce battle.

The confrontation was caused by Billy Ray trying to ground his superstar daughter for talking back to him, and Tish intervened.  After learning that Tish had undermined him and given Miley permission to go out, Billy Ray went berserk with anger.  “Tish locked herself in her bedroom to escape Billy Ray’s wrath. And he pounded on the door screaming: ‘Come out here and talk to me, b****!    He said “You let everyone run wild when I’m not here and its going to stop!

By the way how can Billy Ray be such a hypocrite!  Several years ago he got his 15 year-old daughter to pose practically nude for the Vanity Fair cover – people were incensed shouting pedophilia at the suggestive pose – what did the fool think would be the result of his creation – did he think Miley was going to become the Flying Nun?