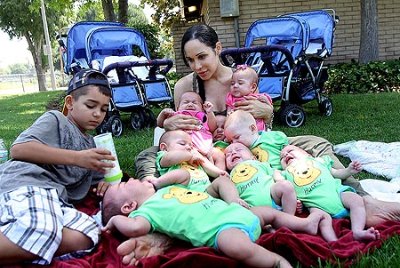 Octomom Nadya Suleman, famous for crapping out an entire herd of children, has no other choice other than to seek public assistance. She was previously on welfare, even though she has denied it in the past.

Now, without her planned reality show in the works, she may be forced to go back on welfare so that she can provide for her 13 kids.

“Nadya has nannies and huge expenses raising 14 children,” the source said. “She needs a lot of money just to keep up with the basics. And now the income has dried up and she didn’t make enough in the past year and a half to live off of it. That money is gone and now she’s facing desperate times. Nadya will never come out publicly and say she’s going on welfare but everyone close to her and familiar with her situation knows that it’s going to happen very, very soon. She needs the money. She has no choice at this point.”

The source added, “And she’s been on public assistance before.”

That really sucks that the taxpayers have to pay for her mistakes. All 14 of them. Ugh, this woman. She needs to name the father of her kids and go after him for part of their expenses. That would seem like the logical next step. Don’t you think?