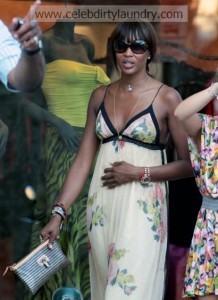 Naomi Campbell boasted to her former agent that Liberian dictator Charles Taylor was going to give her “some diamonds”.   Carole White gave evidence at the war crimes trial of Taylor in The Hague, Netherlands, today (09.08.10) and revealed the supermodel told her she was expecting the jewels after meeting Taylor at a party held at former South African President Nelson Mandela’s house in September 1997.

“Whilst we were eating Naomi leaned back (in her chair) and Charles Taylor leaned forward and Naomi was very excited and saying, ‘Oh, he’s going to give me some diamonds.’ “

When quizzed by prosecutors who the “he” was that Campbell was speaking about, White said: “Charles Taylor.”   The jewels – which were ‘blood diamonds’, precious stones mined in a war zone and sold to aid warlord activity or invading forces’ campaigns – were later delivered to Campbell at the guesthouse she was staying at with White.

Two men went to the room after the pair had gone to bed and woke them up by tapping on the window.   According to White, the men said: “We have something for Miss Campbell, can you let us in? I told them to wait and went to knock on Naomi Campbell’s door.”

When she answered the door the men then handed over “five or six” gems in a “piece of paper”   White added: “They took out a quite scruffy paper and they handed it to Miss Campbell and said, ‘Here are the diamonds.’    “She opened them and showed them to me. They were quite disappointing because they weren’t shiny.”

White then revealed she told Campbell she didn’t think they should carry the diamonds out of South Africa and the pair agreed to donate them to a children’s charity.   Earlier today, actress Mia Farrow also gave evidence recalling the morning after the party during which she claims Campbell told her she had received diamonds from Taylor over breakfast.

The ‘Rosemary’s Baby’ star also insisted it was the 40-year-old catwalk beauty who told her the gift was from Taylor – which contradicted Campbell’s testimony last week in which she claimed it was either Farrow or White who suggested the diamonds were from the dictator.   Taylor has been on trial since 2008 for crimes against humanity, after a bloody campaign he waged in Sierra Leone between 1997 and 2001, during which time he is alleged to have used ‘blood diamonds’ to fund the activity of rebels.  Linking Taylor to the illegal trade of ‘blood diamonds’ is key to the prosecution’s case.