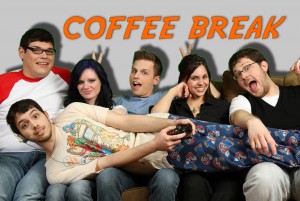 COFFEE BREAK is a new web series that follows two writers and an actor as they try to make it in the biz.  Told from the unique perspective of the writers, viewers can expect sequences coming straight from the writers imagination.   With new content released each week, the show is split into 3 Parts per episode.   In between episode releases viewers can expect Behind-The Scenes content and ESPRESSO SHOTS which are 30-60 second jolts of comedy to prepare viewers for the next part!

The show is produced by Triple Shot Productions: www.TripleShotProductions.com    For a funny laugh, put DoucheBag Dave into your bookmarks.   He is a character from COFFEE BREAK who has his own site and blogs/vlogs regularly about what makes him angry.  In order to make him angry, comment on his videos. www.DoucheBagDave.net

Spread this show to your friends and have a laugh while you take your…COFFEE BREAK!