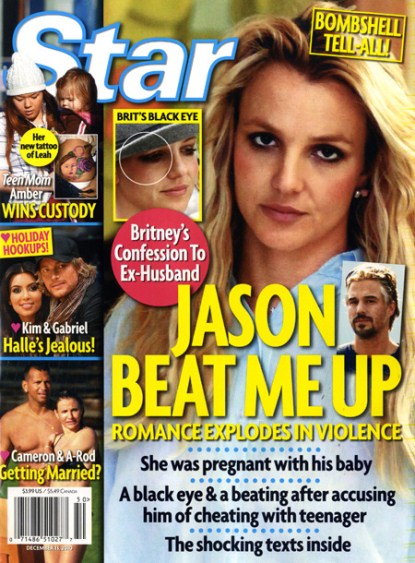 Britney Spears who  has been under the conservatorship of her father Jamie Spears since her much-publicised breakdown in January 2008 has made a tremendous comeback.    The amazing turnaround of her life has been credited to her current boyfriend and agent Jason Trawick.   In a shocking interview Britney’s former husband Jason Alexander has give an interview claiming that Jason beat Britney on several occasions.

Jason told Star Magazine –  “Britney is in an abusive relationship,” the entertainer’s first husband says in a detailed interview with Star. “She told me her life had turned into a nightmare.”    And the abuse wasn’t a solitary incident.   Nor was it the only jaw-dropping secret the megastar told her ex! She also revealed that she had been pregnant with Trawick’s child earlier this year, Alexander says.

Britney and Alexander are childhood frends and were married for only 55 hours.  The union was annulled in 2004.  Alexander says he is only telling his story because he feels Britney needs help and she is reaching out to him.   I am not sure what to think about this, could Alexander be making this up possibly but the fact that he went to a magazine there is also the possibility that it is true.  Another possibility is that Britney told Jason this but she is lying.    Britney is still under conservatorship so hopefully her father can deal with this matter.   I am sure we will start hearing the denials soon.