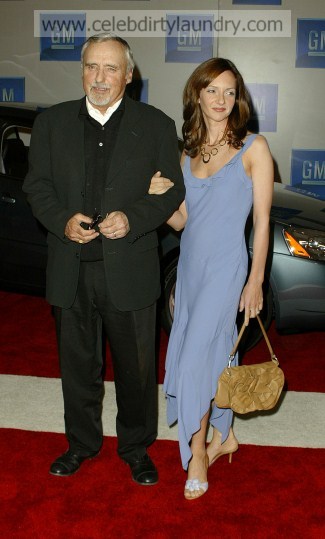 The legal battle between Dennis Hopper and wife Victoria has continued posthumously, with seemingly no end in sight, often unfairly dragging daughter Galen into the middle of it.   Now Jacob Bernstein of The Daily Beast has obtained copies of emails from Banksy’s office suggesting that Hopper’s family may be claiming more assets than what rightfully belongs to them.  Below is an excerpt from the article:

Then there was the question of the paintings—valuable work by the street artist Banksy and the iconic L.A. painter Ed Ruscha that Victoria took with her when she left.   According to Alex Hitz, a spokesman for Dennis and his daughter Marin, "The pre-nup clearly delineates what her separate property was when she entered into the marriage, and none of the pieces she took are listed on the pre-nup. And if they were bought after they got married, they were bought with Dennis’ money, not Victoria’s."   But emails obtained by The Daily Beast from Banksy’s office make it pretty clear that the sculpture from him at least—a spray-painted TV on a pedestal—was in fact a gift the artist gave Victoria. "Having spoken to Banksy and explained your situation," the note to Victoria reads, "he’d really like you to have the installation of his TV on a pedestal for your own collection… Sorry that you’re in this situation."

To read the rest of this article visit The Daily Beast