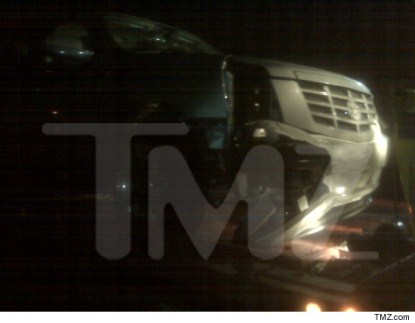 Justin Tuck, 27, who plays on the defense for the New York Giants was involved in an accident tonight.   The accident occurred in Teaneck, NJ and Tuck was driving a brand new Escalade and the other person was driving Nissan Maxima.  The accident is described as minor.

TMZ is reporting: According to a witness on scene, the other driver was walking around afterward, muttering something to the extent of, “I can’t believe I hit Justin Tuck.”  Bergen County PD described the accident as minor and said there were no injuries — except for a damaged street sign.

The passenger of the other vehicle, Tuck and his wife were fine.  Just a fender-bender.