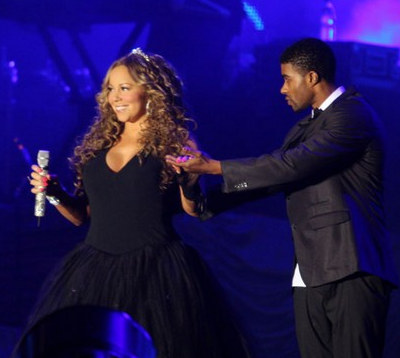 Since lately it looks like Mariah Carey has stuffed an entire Klondike Bar factory in her pie hole, the internet has been ablaze with rumors that she’s finally knocked up by husband Nick Cannon.

He was pretty much useless when discussing the rumors and neither confirmed nor denied them. After reading what he had to say, I’m going to call it now. Mariah is pregnant with Nick’s baby and she’s going to crap a glitter covered unicorn before all of this is over.

During his radio show, he was confronted by celeb blogger Perez Hilton. Nick said, “I’ve said it before and I’ll say it time and time again — when my wife feels like talking about whatever she wants to talk about, you will hear it directly from her.”

In response, Perez said, “There comes a point when there’s no denying anything if it were to happen.”

Useless Nick responded, “Honestly … I say this to you so you can tell whoever it is you’ve got to tell, we all know it’s extremely personal, and it is for a woman to deal with things with her body, and especially when dealing with the idea of childbirth and all that stuff. We know that we’re public figures and that’s something, but … that’s something that you want to keep near and dear … until you’re 100 percent sure in any situation.”

He added, “There’s a certain time limit that you’re supposed to wait before you actually can officially say that you are. You’ve got to take all those things into factor and it gets really heightened when you’re one of the most famous people in the world because you don’t want to mislead anybody.”

So basically what I got from that is that she’s pregnant, but can’t confirm the news for fear of Mariah beating him with her magic pink fairy wand. What do you think?