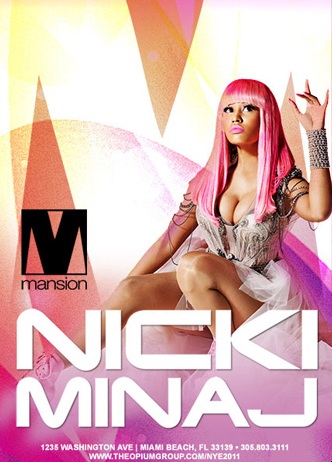 Nicki Minaj and Nik Richie are hosting a big New Year’s Eve bash at Mansion in Miami.  Apparently there will be an all-pink decor and special light show in honor of Niki’s Pink Friday album released in November.

Nicki is a female rapper and comes from probably the strongest tradition of ‘rap’ possible.  You see Nicki, who’s real name is Onika Tanya Maraj is from Trinidad, the home of Calypso and then Soca music – these musical forms are all about verbal commentary put to music – in fact anyone who has listened to calypso at all seriously knows that today’s rap music is but a pale development of original calypso.  Calypso began well over 100 years ago in Trinidad, spreading rapidly to the rest of the West Indies, and originally included stick fighting as part of the song competition!  Trinidad in the days of calypso was populated by an unusual blend of Afro, Indian, Asian, Amerind and European peoples each with strong and different musical influences so the music they created had an amazing and unique sound.

Nicki lived in Trinidad with Grandma while her parents, of Afro and Indian descent, looked for housing in Queens – eventually bringing her over to live in America.  With her Trinidadian roots and that tradition of great calypso she should go far.   In fact Nicki appeared in Port of Spain, the capital of Trinidad, on her Pink Friday Tour.