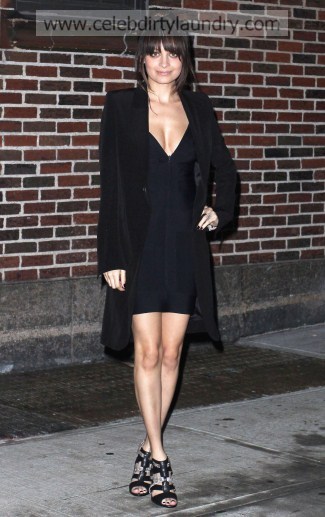 Socialite Nicole Richie confirmed yesterday (15.02.10) that she is officially engaged to her rocker boyfriend Joel Madden – with whom she has daughter Harlow, two, and five-month-old son Sparrow – when she appeared on ‘The Late Show With David Letterman’, showing off a large engagement ring.   She then joined friends at New York restaurant Abe and Arthurs, where she was overheard talking about her impending nuptials.

A source said: “She was glowing. She was telling her table how happy she was.”   Good Charlotte singer Joel, 30, later confirmed the news – revealing they had managed to keep their engagement secret for some time.   He tweeted: “Yep. I’m engaged. Very happy.  “Yeah we’ve been engaged for a while so your all kind of late on that. But Thanks for the hooplah all the same (sic)."  The couple denied that they had plans to marry as late as last year, and were in no plans to rush into tying the knot.

Nicole said: "One day I would love to get married. It’s not something we’re talking about right now. If my kids ask me to get married, I’d get married.  "I think for both of us, we are going to do it because we want to, not because that’s what you do. We’re going to do it when the time’s right."   However, it has been reported that the couple are planning to marry this summer and wedding plans are already well under way.  Photo: Fame Pictures