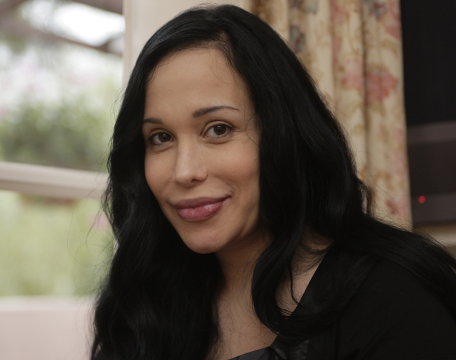 At almost the last moment a White Knight has stepped in to help Octomom Nadya Suleman.  Octomom only has three days left before she loses her Southern California home.  Now if that was not enough problems the dude who owns the mortgage on the house is threatening to humiliate her.  Apparently he is fed up being jerked around and if Octomon does not pay up he is going to hold  a press conference and tell everyone what a horrible tenant she has been.  Octomom still owes a whopping $450,000 on the home.

Amer Haddadin says he’s sick of being jerked around by Octo and her lawyers … and if they don’t settle her gigantic debt by October 9 — dude says he’s going to hold a news conference to tell everyone about how terrible of a resident she has been.

Hirsch says he feels Octo’s pain — what with a foreclosure looming — so he’s willing to pay her $1,000 a day to become a member of his production crew — a job where she would not have to perform sex or take her clothes off.

Well if she does not want the job I’ll take it!  $1,000 a day to be an assistant not bad work if you can get it ;-)  Call me suspicious but I am betting douchebag Steve thinks this is a way to get Octomom next to him and convince her to do a sex tape.