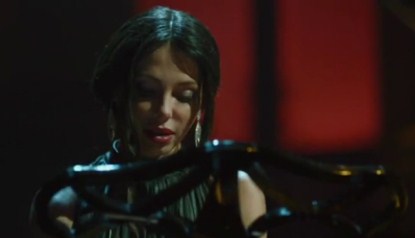 Oksana  Grigorieva’s rep, Steve Jaffe, says that Oksana is in talks to work with a major record producer.   While Jaffe wouldn’t name names — we’re told the producer has worked with the likes of Britney Spears, Lady Gaga and some guy named Michael Jackson.   Well be that as it may, the video we heard was an overproduced piece of absolute trash entitled Beautiful Heartache, sounding much more like UGLY HEADACHE.   The recording completely makes a mockery of music – you could take any human voice and overproduce it to wind up with something as good or probably better than this.

But Jaffe tells us Oksana is still warring with Mel over her prior works. As we first reported, sources close to Mel say he signed over all his rights to Oksana’s music and even sent boxes of CDs back to her house. Jaffe claims so far … none of that has happened.   TMZ  Mel sources say he has indeed turned over everything.

Oksana better keep trying to sue Mel for all he’s got and then some since any popularity for horror (WHORE-ER) videos like these will fade away once the public eye veers away from her, once the Russian tramp’s trumped up Mel bashing finally (can’t be too soon for me!) ends.