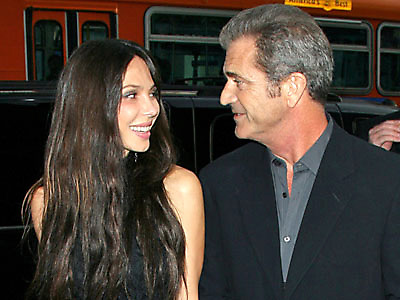 Oksana Grigorieva and Mel Gibson both signed the document in May in which Mel Gibson agreed to pay Oksana the huge sum in return for her handing over “evidence” against him so it could be erased.   The pair are now locked in a fierce legal battle, with Oksana claiming Mel assaulted her and verbally abused her, while Mel claims Oksana – with whom he has an 11-month-old daughter Lucia – tried to extort money from him and deliberately leaked audio tapes revealing his behaviour.

A source who was involved in the alleged two day mediation which produced the agreement told gossip TMZ:

“It was all about the audiotapes and everyone in the room knew it.”   The document, which was signed on May 16 2010, stated Oksana would agree to: “Turn over all ‘evidence’, and represent and warrant that all evidence has been turned over and all evidence will be destroyed in a manner agreed upon by both parties.”

The terms of the settlement promise Oksana $1 million when she turned over of all of the ‘evidence’; $10,000 per month for 18 additional years payable beginning on January 1, 2011; a $1 million life insurance policy on Mel; the rights to their Getty picture deal and all profits from her album, totalling $17,112.  The document also gives strict confidentiality provisions, which have “financial penalties for non-compliance,” and talks about a “joint, mutually agreeable press release about the reasons for the separation”.

Although an initial draft of the document was signed, Oksana refused to sign a formal, longer version laying out specifics, and now says she had no idea she was giving Mel unsupervised contact with Lucia.   In the document she put her name to Mel got “50/50 physical custody” with no restrictions or conditions.   Oksana’s lawyer Daniel Horowitz said: “When a person born in a foreign country comes to America, they look at the American justice system as the best in the world. You have a retired judge as a mediator and some of the best lawyers in Los Angeles in the mediation and you trust that what they are doing is lawful and proper.  “This truly underscores how victimized she was. Mel Gibson deserves better as well.”