Oksana Grigorieva Says She Has Witnesses Who Saw Mel Attack Her 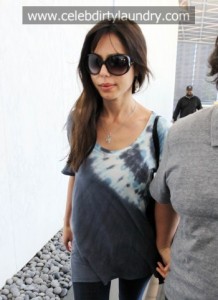 Mel Gibson’s ex-girlfriend claims to have witnesses who saw the actor attack her.   Oksana Grigorieva – who has a nine-month-old daughter Lucia with Mel – has accused the 54-year-old actor of pulling a handgun on her following an explosive row, in which he is believed to have broken her two front teeth and threatened her with a bat.

Sources say the witnesses have not come forward yet but they will tell the Los Angeles County Sheriff’s Department they saw Mel punch Oksana on January 6 during the row at her home, according to gossip website TMZ.   It is believed one of the witnesses is someone who works with the 40-year-old Russian singer on her music.

It has also been claimed at least one of the third party witnesses saw Mel pull the gun on Oksana after he allegedly punched her.   Meanwhile, a woman who claims to have had a relationship with Mel between July 2009 and January 2010 has come forward to say he has an “anger problem”.   Violet Kowal – who started seeing Mel after he separated from Robyn, his wife of 28 years, and two months after news of Oksana’s pregnancy broke – told E! News: “I think he has an anger problem. When he gets angry, he gets really angry.”

She explained: “He can snap. The nice guy can suddenly be a guy who is angry and aggressive.”   And Violet revealed that while Mel was “gentle” at first and gave her money to “treat herself”, he quickly turned nasty when their relationship was made public.  She said: “He got very angry. He called me up. He was very scary. He was screaming. He said he would make me suffer. He didn’t want the relationship to come out. He blamed me for the situation. He called me up, he screamed at me and threatened me on the phone. He was furious. He was losing it.”