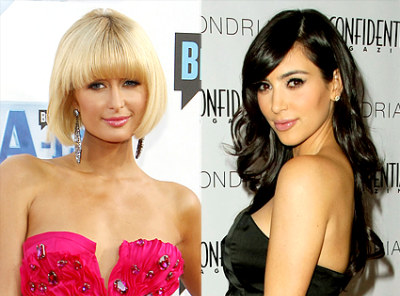 Just recently, Paris Hilton and Kim Kardashian had a little bit of a run-in at Lavo during their second year celebration.

At the party, Kim took the mic after Paris begged the DJ to play Stars Are Blind and said that it was time for them to listen to some “real music”. Now, we’ve learned that Paris was more than miffed at Kim for her outburst.

When Paris was informed that Kim was flown in for the event on a private jet, she had a royal conniption fit. A snitch said, “Paris got so mad! She could not believe Kim got a jet and she didn’t. She used to get the jets.”

When Paris got ignored by clubgoers, she was said to be fuming. The spy said, “Paris is upset at Kim – but it’s one hundred percent jealousy. Kim is not only doing what Paris did, but she’s doing it better and everyone loves her.”

Another source said Kim should be thanking Paris for having a career in the first place. What do you think?