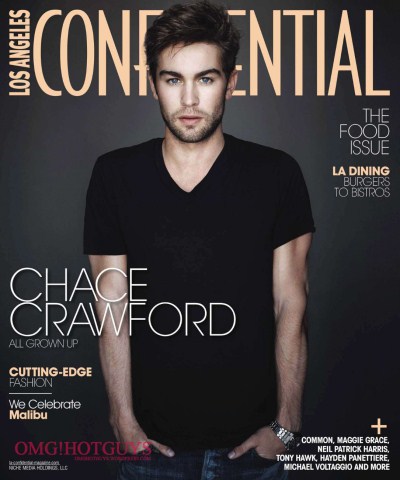 Chace Crawford who was recently busted for Marijuana possession graces the cover of LA Confidential Magazine.   The magazine sat down with Crawford while he was in LA on a break from the New York City-based Gossip Girl to find out what he loves about the City of Angels, what working with 50 Cent is really like and if Serena and Nate will go the distance.  Below is a glimpse of the interview.

LOS ANGELES CONFIDENTIAL: You lived here when you went to Pepperdine University. Now you’re based in New York for Gossip Girl; do you like coming back to LA?
CHACE CRAWFORD: I love being in LA. New York and LA are polar opposites. I’m a Dallas boy, so for the weather, LA is where it’s at. I think the New York winters may end up driving me back out to the West Coast. What makes Hollywood Hollywood is the weather. The sun kind of hits you different out here, so every time I come here it’s rejuvenating.

LAC: In your film Twelve, out this July, you play a young drug dealer. Why was this a role you wanted to take on?
CC: It’s a complete departure for me. The character grew up with the privilege and the money, but his father is running the family’s bankrupt business, and his mom was stricken with cancer and battled that and died. So he’s almost forced to sell marijuana, and he doesn’t even know what he’s doing. He’s in over his head. It’s good for me because it’s a heroic figure, but it’s a pretty tragic, dark, melodramatic movie. There are a lot of really comedic parts in it, and it almost goes over the top to make fun of the Gossip Girl crowd. [The film] is so campy and funny, it’s silly, and then when it’s contrasted with the dark reality of one of the girl characters spiraling emotionally into this tailspin, it’s very tragic. It was a lot of fun—very liberating. It’s kind of a Less Than Zero for our generation.

LAC: Working with 50 Cent has to be pretty different from working with Ed Westwick and Blake Lively. Tell us a little bit about the experience.
CC: I get shot in the movie, and [50 Cent] and [actress] Emily Meade are involved in this scene where I bust in. And when it came time to do it, I basically only had one try at it, and so I guess I got really excited. I didn’t even notice my behavior, but he did. And I was running around asking, “How did we do? How was the angle?” And [50 Cent] turns to Emily and—with the biggest smirk—is like, “Shit! Chace has never been shot before, has he?” [Laughs] Oh, God, I died. That’s how he is. He’s just a big jokester. [50 Cent] is like Mr. Nice Guy Next Door. He gives everyone a big hug, makes sure everyone’s having fun and keeps it light. I remember the day I was driving homefrom school and his first CD came on. I absolutely loved him, so [working with him] was pretty surreal.