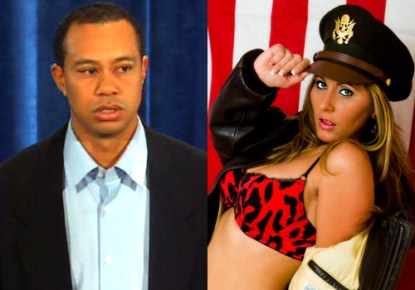 In an ongoing battle between Tiger Wood’s Mistress Devon James and her husband Nick versus Teneal Goyco, it seems that the fine James couple have resorted to nasty racist remarks.  Just to provide the setting for this ugliness, recall that Devon and Nick have a prepay site operating that accepts payments for a purported November 15 release of a sex tape supposedly featuring Devon and Tiger – but which actually features Goyco, according to Goyco.  He claims he was hired and paid $1000 by the James’ to pretend to be Tiger and fulfill a fantasy of Devon’s – apparently the fantasy was to make a bunch of money by marketing a fake tape of her having sex with Tiger.  To date not a single second of the tape or even a still has been released.

But now, over facebook on Sunday, Devon and Nick have called Teneal the “n” word, and other things besides!    The facebook exchange included the following:  “We have never even met your n**ger a**,” Nick wrote, adding that he wants to fight Goyco, who happens to be a professional boxer.  He also wrote: “what you gonna run away from process server… I heard black people are fast but not that fast.”  Nick also said: “I’ll beat that bell pepper nose off your lying black a** motherf**ker.”

Sounds like Mr. Goyco probably wants a bigger piece of the pie now that he realizes what his $1000 impersonation is being used for.  So instead of paying him off properly, the James’ are stonewalling him, denying that they even know him at all.  The truth is probably that they will not release the fake tape they made since their prepay site includes the following terms of purchase: “The Company may, at any time and at its sole discretion, cancel any release of the video.”  And why do we think that there will be no video release?  The tape the couple made with Goyco probably did not come out too well after all.