Randy & Evi Quaid Talked About Being Whacked In Interview [Video] 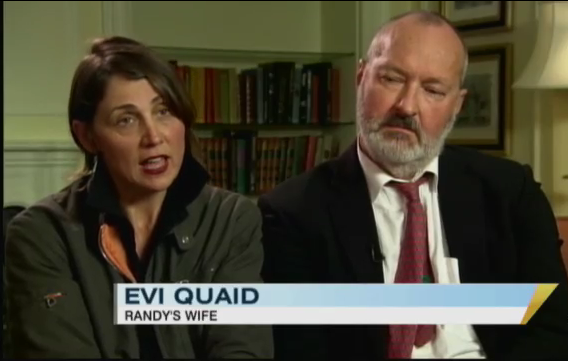 Nut jobs Evi Quaid and Randy Quaid who are seeking asylum in Canada gave an interview this morning to in Vancouver, Canada to Good Morning America.  In the interview Randy and Evi who are due back in California tomorrow [11.01.10] for a court appearance say they will be whacked if they return to the USA.    There is never a dull moment with these to nut cases :-)

“To have my integrity and my reputation denigrated so mercilessly, why, why would someone want to do this to me?” Randy asked.  Evi said those targeting she and her husband include an estate planner, an accountant and the mafia, all working in force to “take the money” they’ve earned in their careers.  We are refugees – I mean that ‘s essentially what it is – Hollywood refugees, seeking to be left alone by the criminals,” Evi said. “I genuinely feel like these people are trying to kill us.”

Listening to this interview this couple needs to be taken to an insane asylum there is something seriously wrong with them.  They say there are not mentally unstable nor are they on drugs.  They go on to talk about Heath Ledger and David Carradine who they think were murdered.  They warn Lindsay Lohan and Britney spears to be careful.  They also say they think Mel Gibson was drugged.  They claim millions of dollars has been stolen from them.  They talk about conspiracy theories, being targeted to be whacked and the mafia.

At this point they intend to stay in Canada and Randy wants to find an acting job.  Somehow I don’t think it is the end of hearing about these two….  What do you think are they insane? or is this all an act?