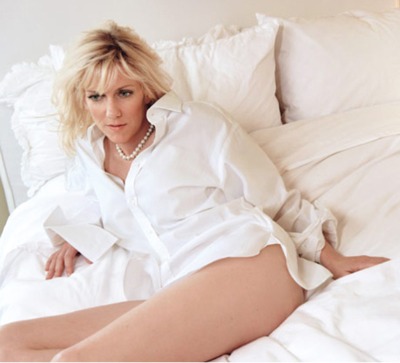 Rielle Hunter is really starting to get on my nerves. It’s sad enough that Elizabeth Edwards passed away yesterday, but like a vulture waiting to devour its prey, she’s already on the “I’m marrying Johnny” bandwagon. This woman is so gross that I think she needs to be slapped. She’s crass, rude and vulgar.

A source close to Rielle said, “Rielle has been very patient through all of this. She still believes that John is her soul mate, and she thinks that they’re going to get married.”

How freakin’ crass can you be? This woman was married to John and had his children and they are in mourning, and she’s expecting to be applauded for having the patience enough to wait out her death? I am so not amused. This is just utterly disgusting.

The snitch went on to reveal, “She doesn’t care about anyone but herself. She’s been selfish and horrible this whole time, no matter what else has been said about her.”

All this time, she’s living with their daughter in a house paid for by John….And she’s still holding out hope that one day they will still be together. The spy added, “She will say nice things about Elizabeth, but only if it makes her look good.”

She sickens me, I can’t help that.