Rihanna Sizzling on The Cover of GQ Magazine UK 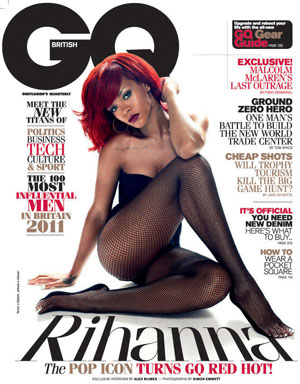 Umbrella Singer Rihanna, 22, sizzles on the cover of British GQ Magazine January 2010.   Lying seductively on a bed of rosies in skimpy undies Rihanna looks hot! In her interview with GQ Rihanna asks fans not to feel sorry for her she has too much pride and she does not want fans to remember her for the abuse she suffered at the hands of Chris Brown.  The situation has only made her stronger and she wants to move on.  She worries that her new sexy image may bother fans.

She said: “Girls don’t like to see other girls dressed sexy. I get that.  “People see my ass out and my boobs out, so it can get a little irritating.”

Meanwhile Rihanna is again on the top of single chart with her new “Only Girl”. The song was released almost 10 weeks ago.

In 2010 she hit the single chart on the top position three times. At first with “What’s my name?” then her song, “Loud”  and now her sing “Only Girl” is on Hot 100 single chart for more than 10 weeks.