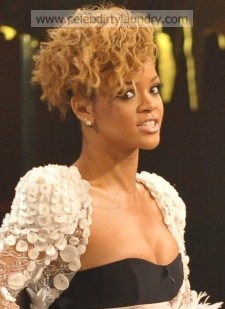 Rihanna felt “connected” to references to abusive relationships in Eminem’s lyrics.   Rihanna – who was left with facial injuries after being assaulted by ex-boyfriend Chris Brown in February 2009 – agreed to sing on the rapper’s track ‘Love The Way You Lie’, as it reminded her of her own experiences.

“It’s something that, you know, we’ve both experienced … on different sides, different ends of the table.   Eminem pretty much just broke down the cycle of domestic violence and it’s something that people don’t have a lot of insight on.   I knew if he sent me a record there must be something to it. It couldn’t just be, ‘Oh, duh! She was in that relationship so we have to get her.’ The lyrics were so deep, so beautiful and intense.   It’s something that I understood, something I connected with.”

In the song, Eminem raps: “I laid hands on her/I’ll never stoop so low again/I guess I don’t know my own strength”.    Chris, 21, was sentenced to 80 hours of community service, 12 months of domestic violence counselling and five years probation after being found guilty of assaulting the beauty, and has since spoken out about his humiliation at losing his temper at his ex-girlfriend.    He said: “It’s unbearable to view. It’s something that I have to live with every time they show it. I’m embarrassed that I couldn’t control my anger at that time.”