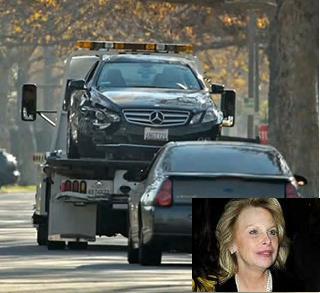 The man who killed himself yesterday when police attempted to arrest him in relation to the Ronni Chasen murder, Harold Martin Smith, was apparently getting $10,000 from a civil lawsuit, not as a payoff for assasinating Ronni.

Police sources are investigating the road rage theory to explain Ronni’s death – apparently Ronni had a bad temper so the Bev Hills cops are putting a theory together where Ronni go into a beef with another driver and that led to her being shot multiple times with at least 2 different types of bullets!

TMZ reports Although there are reports Smith is a suspect in the murder of Ronni Chasen, we’re told that label is based on LAPD sources, and the Beverly Hills PD is only considering him a person of interest.  Nevertheless, sources tell us the BHPD is actively investigating Smith to determine if he was in the Beverly Hills area the night of the murder.

I don’t know about you but I just don’t see a man or men losing it so badly in road rage at an older woman that they blasted her full of gunshots?  It sounds more like the Bev Hills Cops can’t solve the case and now that Harold has killed himself they will try to wrap up the case any way they can – apparently by saying that perhaps Harold gunned down Chasen in a fit of road rage.  Meanwhile cops can’t even prove that Harold was in Beverley Hills the night of the murder and there is NO physical evidence linking him to the crime.

I will say this – if Ronni was gunned down in a road rage incident in Beverley Hills then I’m taking the bus from now on.