Ryan O’Neal Not Allowed To Visit His Son In Rehab 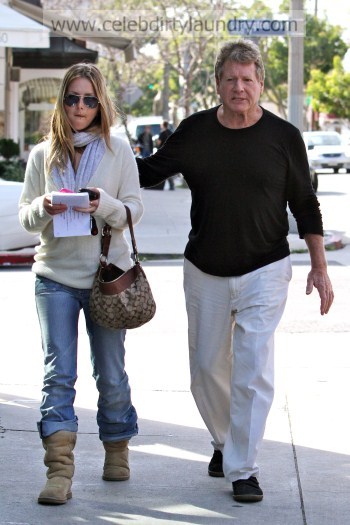 Ryan O’Neal is pictured above yesterday (03-03-10) in Brentwood CA, with a new female friend.  Apparenlty the 68-year-old actor has been reportedly stopped from seeing his son – who he had with the late actress Farrah Fawcett – whilst he is staying in a residential treatment centre for substance abuse problems.

A source told Radar Online: "Ryan has been restricted from visiting Redmond while he is at Impact. It’s been determined that it’s in the best interest for Redmond’s treatment for Ryan to be visiting his son at this time."

Redmond, 25, is currently staying at Impact, a residential treatment centre in Pasadena, where he has previously been treated.   He appeared in court yesterday (03.03.10) for a progress report and was warned by Judge Michael Tynan he would not be allowed out until his treatment was complete.   The judge said: "You have to take a hard look at your life. You are still in trouble. I’m going to ask Impact to eliminate any home visits, you agree with that Redmond?"   Redmond agreed and is adamant he is trying harder now.

He said: "I’m doing better this time."   His lawyer Richard Pintal added: "Redmond has kicked it up, and the progress report reflected that."   It was during an earlier spell at a different Los Angeles treatment centre that Redmond relapsed and was sent back to jail last December.   He was found in possession of heroin during a routine security check by deputies in the car park of Pitchess Detention Center. Redmond – who has battled drug addiction for several years and been arrested numerous times – has also been stricken by the loss of his mother, ‘Charlie’s Angels’ actress Farrah, who lost her battle with cancer on June 25 last year.  Photo: Fame Pictures