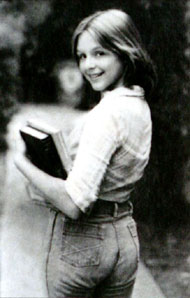 Prosecutors are attempting to prevent Samantha Geimer from having the case against Polanski thrown out of court. In court documents, prosecutors said Samantha Geimer, who was 13 years old when unlawful sex charges were brought against Polanski in 1977, has "no right or authority to dictate the outcome of a criminal case."   What the prosecutors didn’t say – what they could not say – was that Polanski paid an undisclosed amount of money to Samantha to settle a civil court case she brought against the rapist after he plead guilty to having unlawful sex with her.  Samantha Geimer was an aspiring child model in 1977 who went to a Hollywood house for a photo-shoot with Polanski but was drugged and repeatedly raped by him instead. Now a mother of three children who lives quietly in Hawaii, she publicly forgave the director in 1997.   Apparently Polanski’s payoff bought a lifetime of loyalty on the part Samantha.

In her attempt to end the case against Polanski, Samatha’s lawyer said "Samantha Geimer was first victimized by Polanski.   Whatever harm was done to her 33 years ago by Polanski is now a memory.   Samantha Geimer is currently victimized by the judicial system in the maintenance of a prosecution, stale of fact and devoid of current purpose."   While this might be to some narrow extent true, the crimes committed by Polanski need to be addressed by the courts even though Geimer might have forgiven him. If Polanski is allowed to go free at this point then the message goes out to all rapists that as long as you escape justice and do not get caught until you are elderly then its okay to rape! Clearly this is not the message we as a society wish to promulgate.  The Oscar-winning director of "The Pianist" was arrested in Switzerland in September last year on a U.S. warrant and is currently under house arrest awaiting extradition in Switzerland.