Sandra Bullock Has Moved Back To Her Pre-Marital Home 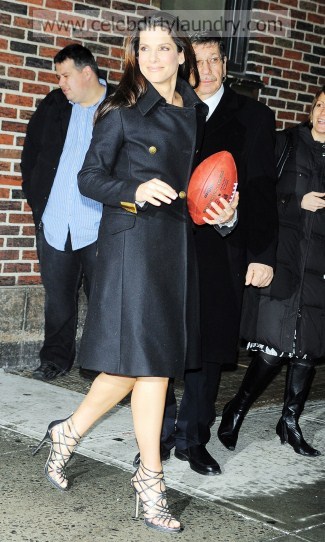 Sandra Bullock  – who has been left devastated by allegations husband Jesse James cheated on her with at least four other women – left the house she shared with her spouse of almost five years earlier this month and is now hiding out at the Hollywood Hills property she purchased in 2001.

A friend said: "She is here."   Since returning to the property, Sandra has been inundated with visitors who want to show her their support.   A neighbour said: "There has been a lot of activity at the house.   "There have been a few cars going in and out of her gate and people going in there in the last few days. There has been more activity here in the last week than in the last year. It’s usually very quiet here."

Sandra, 45, bought the property for around $1.48 million and although she moved in with Jesse in nearby Sunset Beach, she kept the house.   A source told RadarOnline.com: "She loves the house. That’s why she never sold it. It’s a pretty big property and it’s private."   Until last week, Sandra had been in her hometown of Austin, Texas, where she was being comforted by friends and family.

Friends don’t think her marriage to Jesse – who allegedly had flings with tattoo model Michelle ‘Bombshell’ McGee, stripper Melissa Smith, photographer Brigitte Daguerre and an unnamed mistress who is represented by high-powered lawyer Gloria Allred – will now be able to survive.   One pal said: "She’s beyond upset… and she has every right to be. She was on top of the world with her Oscar victory and now this. It’s such a difficult thing to deal with. How can their marriage survive this?"    Photo: Fame Pictures