Sandra Bullock on her Nominations 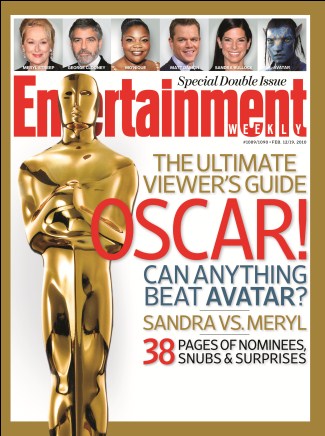 In this week’s issue, Entertainment Weekly offers a complete viewer’s guide to the Oscars. With Meryl vs. Sandra, bomb squads vs. blue creatures, and Kathryn Bigelow vs. James Cameron, this year’s Oscars will feature some of the most exciting showdowns in years.

Yesterday, Sandra Bullock picked up a Best Actress nomination for her work in The Blind Side, and now the first-time nominee finds herself pitted against 16-time nominee Meryl Streep (Julie & Julia) for the prize. Not that she feels competitive. “Meryl and I laugh about what people say about us going ‘head to head,’” Bullock tells this week’s Entertainment Weekly. “In our world, we talk, we laugh, we’re so thankful just to have a mention. I told her, ‘This ride with you has made it so sweet.’ Because I like her so much as a human being and as a woman.”

But her honors don’t end there. A day before nabbing her Oscar nod, Bullock found out she was nominated for a Razzie for her performance in last September’s flop All About Steve, a film she also produced. “Oh my God, how fantastic is that?” she says of the recognition. “I’m showing up if I win.” Seriously? “Hell, yes! I do everything 100 percent,” she says. “With All About Steve, we were trying to do something different. And if it gets some kind of award, that means people are talking about it. I’m more comfortable with criticism than I am with goodwill, because I’m more familiar with it, and I’ve made friends with it. And the Razzies are a great honor.”