Sandra Bullock Will Place Her Razzie Award Next To Her Oscar 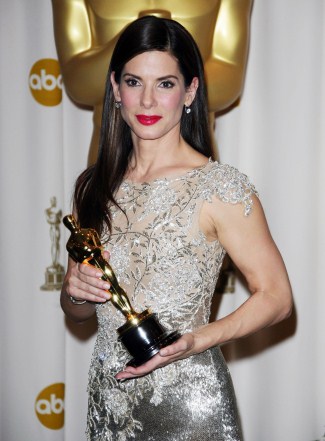 The 45-year-old actress, who won both the Golden Raspberry for Worst Actress for her performance in ‘All About Steve’ and the Academy Award for Best Actress for her portrayal of Leigh Anne Tuohy in ‘The Blind Side’, values both accolades equally.

She said: "I’ll keep them right next to each other. It’s all about the balance."   However, the Hollywood star claims she hasn’t fully come to terms with winning the Academy Award.   She said: "It’s really heavy and exquisite and I’m telling you, it has not sunk in. I don’t know who you people are or what I’m doing here I feel like I’m still in my bedroom asleep.   "I’m hoping in a week’s time I’ll just look back and just… when you are as lucky as I am you just feel like you have an embarrassment of riches. I’ve been saying it all night, I’m a lucky gal."

Sandra thanked all of the fellow nominees in the Best Actress category – Carey Mulligan, Gabourey Sidibe, Meryl Streep and Dame Helen Mirren – when she picked up her award but claims she did not have a speech prepared. She added: "All of my speech was improvised. I don’t prepare speeches. Because then you think you’re gonna win. I just pulled that one out of a dark place."