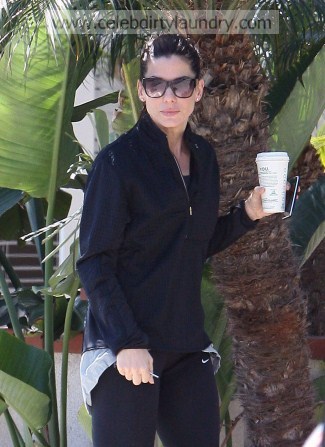 The Oscar-winning actress – who is rumoured to be planning to divorce the motorcycle entrepreneur following allegations he cheated on her with at least four other women – will not seek guardianship of Chandler, 15, Jesse Jr., 12, and six-year-old Sunny even though she was believed to have looked after them while her spouse was in rehab.

Jesse Jr. and Chandler are the ‘Monster Garage’ host’s children from his first marriage.   Jesse left rehab earlier this week after receiving treatment for sex addiction but has reportedly told friends he knows his marriage to Sandra is over.   After being spotted without his wedding ring, a pal said:

"Jesse is finally admitting to himself that he blew it. The marriage is over and he only has himself to blame.   "His stint at the Arizona rehab facility helped Jesse understand what he has done to his wife and his family. He is a beaten man. Jesse removing his wedding ring is a big deal. As long as he wore his wedding ring, he believed there was some hope. Now, he is finally admitting to himself and everyone else that any chance of getting back together with Sandra is dead."

Sandra – who has also been spotted without her wedding ring – is said to be preparing to divorce Jesse after being unable to forgive him of his infidelities, which included an 11-month affair with tattoo model Michelle ‘Bombshell’ McGee.  Photo: Fame Pictures