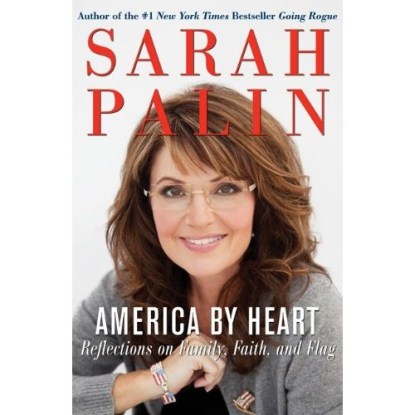 In presidential hopeful Sarah Palin’s new book America by Heart : Reflections on Family, Faith, and Flag she is very critical of Levi Johnston.  Her book is set to be released November 23, 2010 and is advertised to celebrate the enduring strengths and virtues that have made this country great.   What it actually does is criticize everyone from Obama and American Idol to Levi Johnston.

About Levi:  “We all had to bite our tongues — more than once — as Tripp’s father went on a media tour through Hollywood and New York, spreading untruths and exaggerated rhetoric. It was disgusting to watch.”

About American Idol: “Chalk some of them up as victims of the cult of self-esteem. No one they have encountered in their lives – from their parents to their teachers to their president – wanted them to feel bad by hearing the truth. So they grew up convinced that they could become big pop stars like Michael Jackson. “

About Obama: “He won the presidential election despite him apparently being a “self-esteem-enhanced but talent deprived performer.”

Sarah Palin’s jealousy and arrogance knows no bounds.  She is critical of everyone.  I for one am tired of the Palins being so much in our face and wish they would just go away.  Some how I don’t think we have heard the end of them.  I will not be buying her book – will you?