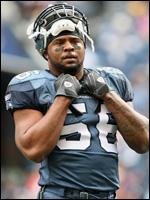 Over the weekend Leroy Hill beat up his girlfriend – she had marks and bruises indicating an assault and she told police it was Leroy who did it.   This bum was arrested in January of 2009 for marijuana possession after he was found passed out behind the wheel of his car in Atlanta.

What does the NFL have to say about men who beat up their women?   I could not care less about his marijuana possession – that is his business as far as I see it but beating up people, especially women who are a fraction of their size can not be tolerated by NFL players.   The NFL needs to get rid of Leroy Hill.   Crimes of violence like this one that are tolerated send a message to society that its okay to slap around your girlfriend, beat your wife, be a beast and still collect multi-million dollar salaries playing games.

I say boycott the NFL if Leroy Hill is allowed to play football in the league again.