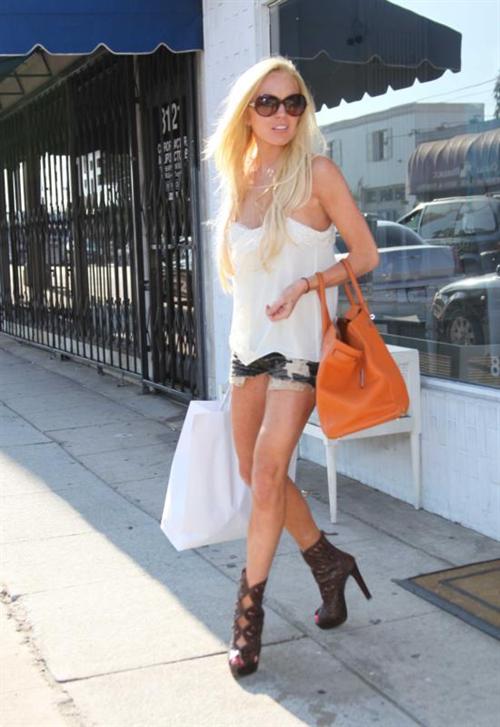 Lindsay Lohan had a supervised shopping trip outside of the Betty Ford Centre Tuesday.  “Lindsay bought a leopard sweater, a lot of pajama bottoms, and a plenty of socks,” the store manager Tiffany Bennett said.  The clothes cost $200 and Lindsay paid for them.  This shopping was at Forever 21 in palm Desert where the manager said Lindsay was well behaved and low key.  Tiffany also said that Lindsay is often seen at the local Starbucks.

“We were surprised that Lindsay was so low key,” Bennett said. “The only thing she asked us to do was to hold some of the items at the front until she was finished picking things out.”  Lohan was accompanied by an unidentified female and snapped up $200 worth of merchandise including “a leopard sweater, a lot of pajama bottoms, and a ton of socks.” Lohan’s shopping companion also did some damage, buying up around $300 of merchandise.

Judge Elden Fox told Lindsay to stay at the Betty Ford center until January 3 – and this wasn’t merely friendly advice!  Failure to follow the Judge’s instructions could land Lohan in jail for 6 months – and there she will not enjoy shopping sprees and daily breaks at Starbucks – so Lindsay stick it out at Betty Ford and then move on with your life – you’ll be happier and healthier and free!