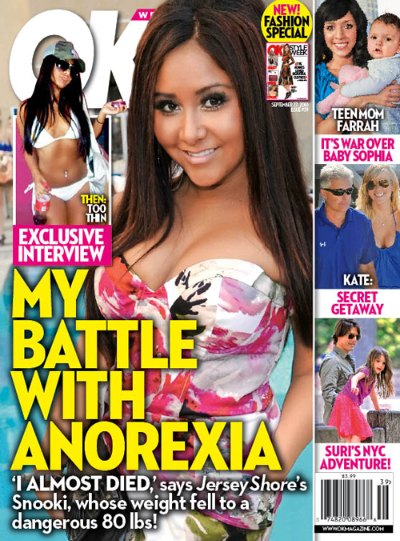 Jersey Shore actress Snooki wants us all to know that she was struggling to battle anorexia. Umm, okay, we’ll bite…

She became famous for her poofed up hair, small stature and her overtanned self, but now, Snooki says that she’s been in a serious struggle. Only a few years ago, Snooki was “painfully insecure” and suffered from anorexia and bulimia.

Interesting. It doesn’t appear that she’s suffering from any eating disorder. And we’re not ones to mock anyone’s struggles, we’re just sayin’.

She finally overcame the battle and learned to have a positive self-image. Good for her. She’s in top guidette shape! Where are the photos of the younger pre-Jersey Shore Snooki?!!??