Snooki Dumped Me in a Voicemail, Says Boyfriend 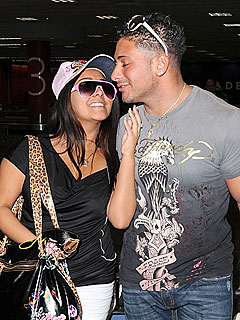 Via People on Monday, Snooki’s boyfriend  tweeted that he was back on the market and now, Emilio Masella, the Gold’s Gym trainer who began dating Nicole “Snooki” Polizzi in January, is speaking out about his breakup with the Jersey Shore star.

“I told Nicole I tried out for Real World and she was upset,” Masella tells PEOPLE. “She thought I was using her to get on the show which is ridiculous.” An argument ensued, and at 6:30 a.m. on Sunday, he received a voicemail from his angry girlfriend saying, “You’re nothing. You’re single.”

Masella was confused and tried to call her back, but she hung up on him. What he didn’t expect were the allegations of infidelity — “I’d never cheat on her–I love her,” he says — and the rumors that Snooki hooked up with her costar Mike “the Situation” Sorrentino on Monday.   To read the rest of this story visit People.