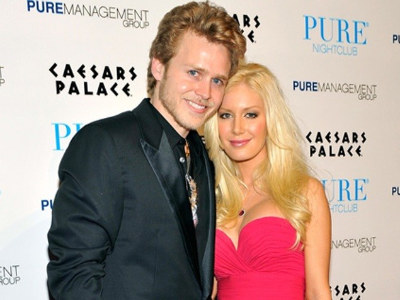 Heidi Montag and Spencer Pratt have played us all for fools! I know, shocking, right???

They were said to be divorcing, thus ending the reign of Speidi forever. But, apparently they love dashing our hopes, because they’re back together again. Surprise, surprise!!

Spencer was arrested when trying to board a plane from Costa Rica to the States while carrying a weapon. The twosome heard opportunity knocking, figuring that they could use that incident to their advantage. Thus, they have gotten back together all because of Spencer’s arrest.

Pratt said Monday that Montag stood by him during what he called the “wildest day ever of either of our lives.” He says that sparked hope that she might drop her divorce filing. He and Montag were back in Los Angeles after Saturday’s incident.

Police in San Jose, Costa Rica, said the couple were briefly detained at the airport for illegal arms possession after security officers found two unloaded handguns in their luggage. Police say Pratt and Montag hadn’t declared the weapons and lacked permits to have them in Costa Rica.

How convenient for them. Everything and anything is fake. Except for the arrest, of course. That was indeed proven true….but not because anyone trusted Spencer’s accounting of events.