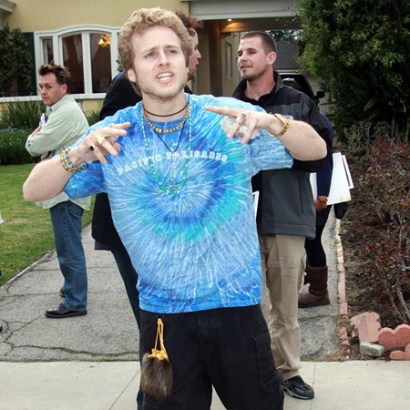 Spencer Pratt claimed to have found footage of Heidi Montag and Karissa Shannon when he was clearing his belongings out of the attic in his former Malibu home, but the former Playboy Playmate Karissa Shannon insists he took her video camera, which contained the saucy clips.

Karissa said: “Me and Heidi were hanging out at her house in Malibu and he came over to pick up some stuff and he ‘accidentally’ took my camera.  “I talk to Heidi every single day and I tried to be there for her when she was going through her divorce, but now it’s starting to affect my life. Spencer had no right to steal my camera. There are other things on there that I don’t want to come out, including the video of me and Heidi.”

Karissa – a former girlfriend of Hugh Hefner who is now dating Sam Jones III – also denied Spencer was present during the recording of the tape but does confirm there is a sex tape.  She told RadarOnline.com: “There is a sex tape of me and Heidi. It’s just me and Heidi, that’s it.  “I don’t want people to see it.”   Earlier this week, Spencer – who split from Heidi in April this year after a year of marriage – claimed to have three sex tapes featuring his estranged spouse, which he threatened to make public if she doesn’t agree to make another reality TV show with him.

So what this all translates into Heidi, Spencer & Karissa have cooked up this scheme to get more publicity.  What better than a sex tape to cash in and extend their 15 minutes of fame?