Spencer Pratt To Be Sued? 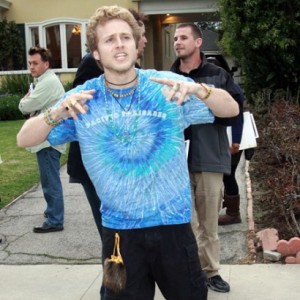 Spencer Pratt could be sued by Karissa Shannon for allegedly stealing some x-rated footage from her home.   Spencer is thought to be in possession of a sex tape featuring the former Playboy Playmate and her boyfriend Sam Jones, but the blonde beauty – a close friend of Spencer’s estranged wife Heidi Montag – claims he illegally took the private video and is threatening legal action if he doesn’t return it.

In a letter from Karissa’s lawyer to Spencer, it claims he is in possession of footage that was “taken from Karissa” and “contains private materials” featuring herself and her boyfriend.   While he could face legal action for releasing that footage, it was recently reported Spencer had decided against releasing sex tapes featuring his estranged wife.   The 27-year-old star had threatened to release three raunchy films of Heidi – who he separated from in April after a year of marriage- if she refused his pleas to rekindle their romance and make a new television programme, but apparently changed his mind as the blonde beauty refused to authorise making the footage public.

Spencer’s assistant reportedly wrote to Vivid Entertainment – the adult film company who were in negotiations to release the tapes – and said:

“Heidi’s made it very clear that she is not interested in releasing any tapes. It looks like she pulled the kill switch.   “Spencer’s not interested in further destroying their relationship by pursuing an avenue she’s so vehemently against.”

According to the letters, Spencer was apparently surprised that Heidi turned down the chance to make a huge sum of money from the videos – two of which also feature her estranged husband while the third depicts her with Karissa – and had threatened legal action if the footage is made public.