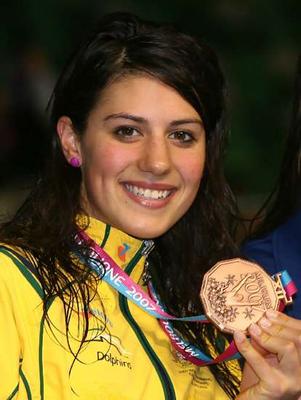 What we say the in the heat of the moment always carries the seed of the truth about our sentiments.

Sometimes we come across too strongly or use profane language when we speak extemporaneously and emotionally without taking time to calculate the effect of our words, but one thing is for certain – at those times we tell the truth!

This is why it is ridiculous for Australia’s triple Olympic gold medalist Stephanie Rice to expect that her tearful public apologies for making a really gross homophobic comment on Twitter will be believed or accepted.

Rugby is a big deal in Australia and after her team, the Aussie side, squeaked out a narrow victory over arch rival South Africa, Rice joyously tweeted “Suck on that faggots!”

Wow! Not cool at all.

Stephanie had enough time to think about what she was doing and still decided that the best insult she could throw at the opposing side, South Africa, was to call them faggots (which is an insulting term for gay males). Furthermore, she belittled them by telling them to fellate the score/their defeat in their losing effort, i.e. suck on it.

Its not like she blurted these words out, not that that would excuse her anyway, but she wrote them and pressed “send” giving her plenty of time to consider what she was doing.

Now she is tearfully apologizing everywhere and making all kinds of lame excuses for her disgusting behavior.  I am not buying any of it. She made the statement because she is low class and that is how she sees the world. I would much prefer if she would just admit her homophobia rather than further insult people by asking us to believe that she didn’t mean to do it.

The fact is she quickly deleted the statement after she had sent it out but it was too late. Jaguar has already dropped her and cancelled her contract and I am sure she will lose other lucrative deals – as she well should.

Why would any respectable company want to be represented by a star athlete who speaks like Rice did? She is a racist, plain and simple. She should not be hired by any firm unless that firm’s goal is to insult their homosexual customers and the rest of us who refuse to tolerate hate speech directed at any group or minority.

Article first published as Stephanie Rice Sorry for Using the F-Bomb and It’s Not Good Enough on Technorati.