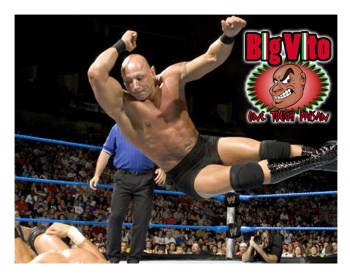 Pro Wrestler Vito LoGrasso, also known as “Skull Von Krush”, “Von Kruss”, and “Big Vito”, has been at the top of the Pro Wrestling charts all around the World.   He has also mentored many up-and-coming pro wrestlers and is now forming a tag-team with one of the top up and coming wrestlers in the game today, Francisco Ciatso, launching “Da Bada Bing Boys”.

Big Vito currently holds the title of ACPW Heavyweight Champion and is a former superstar of ECW, WWE, TNA, and WCW.

With all his accomplishments and world-wide fame, Big Vito could probably have had his pick of any Pro Wrestler in the World for a teammate, instead, he decided to look for someone to whom he could lend a hand up to the next level.  Vito’s decision to form a tag team, and his search for an up-and-coming wrestler, was World News. Vito started receiving videos and applications from all over including from Germany, Austria, Japan, and Australia.

“People started sending me applications from everywhere,” says Vito, “but I decided to reach out to someone that I had mentored in the past, I could trust as my partner, and that just needed someone to give him a chance to go to the next level.”

Francisco Ciatso also known as “Uptown Frankie Capone” is the man that Big Vito Lograsso is looking for. Francisco has 13 years experience, which spans the globe to include, all over the United States, England, China, Puerto Rico, and the Dominican Republic. Not to mention Vito and Francisco have the same heritage and New-York-Italian style, and that is why Vito decided to form a tag team with Francisco. Francisco had this to say,

“It is an honor to be wrestling along side Big Vito and I know we are destined for GREAT THINGS.” “Frankie’s a hard worker, and a good listener,” says Vito. “He’s always taken my constructive criticism to improve his skills. Sometimes hard workers like him get over looked, but I wanted to give him the chance he deserves.”

Their first match as a team is Saturday, Nov. 13 in Orlando with Pro Wrestling Xtreme (PWX).

Vito LoGrasso regularly mentors young wrestlers, speaks at schools, and wrestles for benefit shows for various charities. He is currently gearing up for the Thanksgiving/Christmas season where he serves food, visits sick kids in Hospitals and gives gifts to families in need.

Vito has just one thing to say to future opponents of Da Bada Bing Boys: “Look out tag teams around the world! I promise that this team will be a hard working, tough, no nonsense team that will fight from bell to bell.”

What does Vito hope to teach Frankie through this experience?

“One thing Frankie will learn from me,” says Vito, “is that we can accomplish anything with hard work and perseverance.”