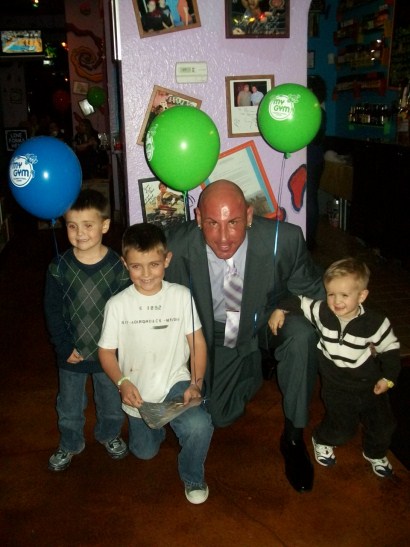 If you always thought of world-class professional wrestlers as too big to care, think again. Pro Wrestling Superstar Vito LoGrasso does more charity and volunteer work, especially for children, than most of us will do in a lifetime.   From mentoring and teaching young athletes, to fundraising for firefighters and the military, to remembering an old friend in need, Vito has either done it all or wants to try.

“I never turn away anyone with a cause,” says the Former WCW Hardcore Champion. “Whether it is visiting children in the hospital at University Community Hospital or helping out wrestling at a Charity Fundraiser Event, I am there.”

Vito says he has been inspired partially by past legends of the sport and on the big screen, like Actor and Comedian Bob Hope. Hope supported the military and veterans.  “I want to use my celebrity status to help people any way I can,” says the former superstar of ECW, WWE, TNA, and WCW. “I wish more celebrities would do the same.”

Vito also knows what it’s like to be poor, growing up on the streets of Brooklyn, so he identifies with those in need.   Also known as “Skull Von Krush” and “Big Vito”, Vito doesn’t just help, but goes above and beyond. When Big Vito teaches wrestling or personal training, he makes sure that physical excellence is not the only thing he teaches.   “I teach them the total package,” Vito says, explaining that mental, interpersonal, and spiritual strength is just as important as physical. “I want the kids to be well rounded.”

And the big wrestler with the big heart still isn’t too big to laugh at himself. Not afraid to take on a different kind of challenge, he’ll squeeze into a sexy woman’s dress and dance to “All My Single Ladies”.    “The kids love it,” Vito stated. “I feel like the pied piper.  Everyone from grandparents, teenagers, adults are on the floor laughing with me.”   Called one of the most “underrated sports entertainers”, what reward does Big Vito get for daring to do what few men ever would?

“The best thing in the world is just seeing the joy in people’s faces,” he says.   “People think that I have the best life ever, but I have struggles and hard times just like everyone else,” Vito says. “The important thing is to not let it knock you down and never let anyone tell you that you can’t do anything.”, added Vito.  “I’ve accomplished my goals, and I want everyone to know that if I can’t do it, they sure can or at least try their best.”