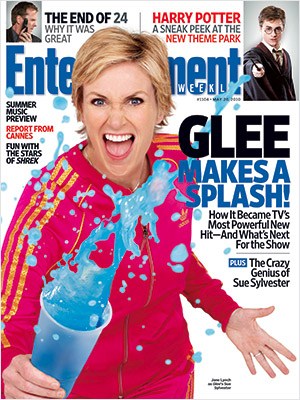 Glee has already had some phenomenal guest-stars, including Josh Groban, Kristin Chenoweth, and Neil Patrick Harris. Now, Entertainment Weekly has learned a certain music sensation may be appearing on the hit Fox series in a season two Christmas episode: Susan Boyle.

The Britain’s Got Talent runner-up is conveniently on the same record label, Columbia, as the Glee cast. And who would Boyle play?   “I have two words for you: Lunch. Lady,” says Glee co-creator Ryan Murphy.   “I think Kurt would just die to give her a Christmas makeover. I don’t even know if she’s interested but it’s been pitched.”  Besides the potential Boyle guest spot, Murphy also tells EW that there are plans for the cast to release a Christmas album as well (Rob Stringer, Columbia/Epic’s chairman, wouldn’t confirm the Boyle or Christmas album details but did say, “All very interesting ideas. I’ll bring them up at the next development meeting.”).

The new issue of EW (on stands Friday) features Jane Lynch as Sue Sylvester on the cover, and has more information about what’s in store for next season, and details on the season finale.