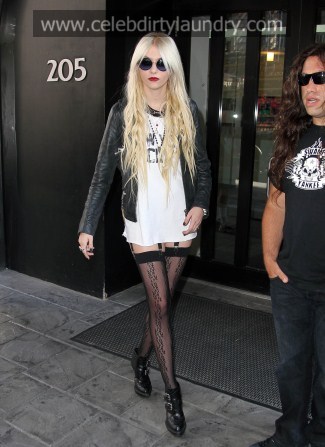 16-year-old actress-and-singer  Taylor Momsen – who fronts her own band The Pretty Reckless – believes she was being shaped as a person through the clothes that were being chosen for her and she had to reclaim her wardrobe to be able to show her true personality.  Taylor – who is the face of Madonna’s fashion line Material Girl – said:

“I kind of had a freak-out at some point because you know I was getting moulded into this thing that wasn’t who I am, and it was fitting into the world that will make you popular.“I think firing my stylists has allowed me to be more free, and I now dress myself.”

Taylor – who plays Jenny Humphrey in ‘Gossip Girl’ – now likes to wear a lot of leather because it is associated with rebellion.   Speaking to the MTV Style blog, she added:

“I like a lot of leather, I like a lot of dresses, I guess it’s been known to be provocative. I just dress like I dress before people saw me, before I was in the tabloids.”

Taylor – who writes all her own songs and plays guitar – recently claimed a lot of people will be shocked by The Pretty Reckless’ debut LP, because it isn’t a stereotypical teen pop album.  She said:

“People will be surprised by the record. I mean, it’s a rock record. I get that there is this blonde thing from ‘Gossip Girl’ and they’re expecting pop s**t, but it’s a rock band and its heavy. Our record is a life record. It confronts everything head on.   It’s death, love, drugs, sex, religion, politics.”